"You operated on that eel?" I asked, my eyes opening wide.

Nathan Marcucci, the manager of the aquarium at the San Antonio Zoo, nodded and pulled out his phone showing me a video of how, along with the Zoo's veterinarian, he'd built a constant flow system to move water over the anesthetized animal's gills while they removed a fatty tumor from its tail. The eel, resplendent in brown and white stripes, curved elegantly through holes in the limestone rocks in its tank, evidence of the success of the operation.

"We think," said Nathan, "it could be the first eel surgery performed."

Last Friday, I was invited to tour the aquarium at the San Antonio Zoo by auqarist Sara Horvath, who along with Samantha Mehr and Natalie Hunt, curate the jellyfish exhibits. The San Antonio Zoo, at 108 years old, reminds me a lot of the St. Louis Zoo, where I grew up. The architecture is stately, and slightly art-deco. Bridges and pathways give way to ponds full of pink flamingos and wrought iron aviaries. Like so many zoos today, it has become focused on conservation and rehabilitation, along with education.

The aquarium itself hails from the 1940s, with a broad white facade into which massive shells are inlaid. It's small by aquarium standards, and even smaller in the backstage regions where the curators squeeze past each other to tend to the animals. But as we walked from tank to tank and each curator took a turn describing what it held, the stories of the animals made what at first seemed simply pretty or nice into something expansive and fascinating. 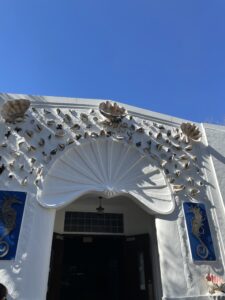 One tank held small azure and orange pupfish, native to Mexico and now extinct in the wild. They liked to lay their eggs in a pom-pom of yarn planted in the center of the tank. Another held a kind of cichlid that brooded its babies in its mouth. The curators watched the mothers until they were just about to give birth. Then they'd gently squeeze their jaw, gather up the babies, and keep them safe from becoming prey. The Fly River turtle named Karl was so charismatic a group of summer kids created a "Karl for President" campaign.

Natalie had taken over a tank meant to represent a tropical river's edge. She'd grown an entire garden of water plants and now stick fish--that look utterly like sticks--camouflaged themselves in the foliage. She'd done target training with archer fish, which spit streams of water at their insect prey, placing little bags above the tank for them to hit. And several times had been on the receiving end of their artillery as well.

As we neared the Caribbean tank,  Nathan tossed in a ball of seaweed. "The animals were getting a little worked up. This will calm them down." He pointed to one of the stones resting near the right side. One of the sharks had layed some egg cases there. I would have missed it entirely but for the aquarists showing me where to look.

"They do it all the time," Samantha told me. "One time one even hatched. She's swimming the tank now. But there aren't any male sharks in the tank."

"WHOA!" I exclaimed. Parthenogenesis is when females lay eggs that develop into babies without being fertilized, which means that their young are actually their clone. It's known to occur in aphids, worms, spiders, chickens, snakes, lizards, and sharks. No one yet knows if these egg cases will hatch, but these exceptional aquarists are keeping close watch.

Before I left, I lingered over the exhibits of the beautiful moon jellies (Aurelia sp.), as well as darling upside-down jellies (Cassiopea sp.) which look like swimming flowers. Like coral, they host photosynthetic algae in their tissues, giving them a beautiful amber hue while the tips of their tentacles take on a blue ombre. Both species are, I saw when we toured the backstage aquaria, prolific breeders. There's nothing I love more than oohing over baby jellies, and so I'll leave you to do that too.