Here's a delightfully fun conversation that dives deep into Life on the Rocks and skims the surface of Spineless with Lesley Ewing of the Shorewards Podcast.

My trip to Hawai'i for the Hawai'i Book and Music Festival and the Better Tomorrow Speaker Series offered the opportunity to sit down with Savannah Harriman-Pote at The Conversation on Hawaiʻi Public Radio.

Really fun to be interviewed live for KXAN's Studio512 with Texas Book Festival Executive Director Lois Kim in the runup to my favorite time of the year in Austin. 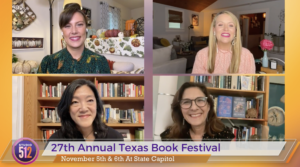 In this Halloween-themed podcast for kids, Everything Under the Sun, I answer questions about jellyfish blood, or do I?

Thanks to the Austin American Statesman for a blurb in the run up to the 2022 Texas Book Festival. Such an incredible lineup!

Quickening heartbeat! The New Yorker added Life on the Rocks to its Best of 2022 (so far) list!

Much to discuss with Randy Olsen on the ABT Time podcast: a bit of a walk down memory lane and then a gambol through the divots and berms of science communication.

On the BBC's The Climate Question (which asks great questions!) I helped field this question: What does a hotter sea mean for life beneath the waves?

Thanks to the Big Idea Club for featuring Life on the Rocks along with two other wonderful books that transform our view of nature.

In this nuanced episode of One Planet at KALW, Public Radio in the Bay Area, I spoke to Rose Aguilar about Life on the Rocks.

So grateful for this truly beautiful review from an incredible writer, Bill Streever, in E, The Environmental Magazine. It speaks to all I was hoping to do in this book.

Thoroughly enjoyed talking about jellies, corals, science, motherhood and so much more with Betsy Rosenberg on GreenTV. 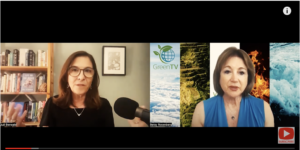 Thanks to Town Square and Brenda Valdivia from Houston Public Media for this delightful, wide-ranging interview.

I really enjoyed this broad-ranging conversation with New Books Network. Thank you for helping to share the word about the world of corals with your audience!

Grateful for the opportunity to write about the Five Lessons that coral taught me while writing LIFE ON THE ROCKS for The Next Big Idea Club.

WHOA! The New Yorker offered this amazing review of LIFE ON THE ROCKS! 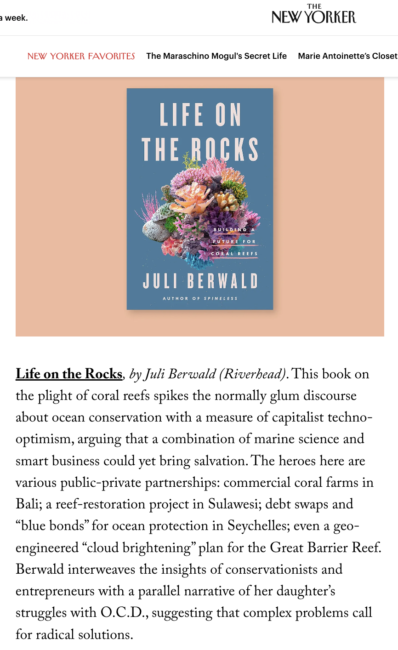 What a beautiful interview The Open Notebook published about LIFE ON THE ROCKS! This one dives deep into the process of writing the book--saltwater-logged notebooks and all!

Huge thank you to Joy the Baker for putting LIFE ON THE ROCKS on their list of nonfiction summer reads!

What a dream of a mention in Conde Naste Traveler (and also in their newsletter): "A blast to read"!

What an amazing surprise to be on the New York Times list of 7 New Audiobooks to Listen to Now. (Also, pretty cool to be adjacent to Jonathan Van Ness, again!)

I couldn't be more pleased to be included in Yale Climate Connections Earth Day Reads. It's an incredible collection of books on website I've turned to for years for important research and perspective, which makes being included especially meaningful.

Thrilled to be on Penguin Random-House's Green Week roundup of books to check out as Earth Day rolls around. It's an incredibly top notch list, including Elizabeth Kolbert and Hope Jahren.

It was a joy to be featured on the Feminist Bookclub's podcast. Marquita's wide-ranging questions made for such a thoughtful conversation.

Had the chance to talk about Life on the Rocks on Cool Science Radio with Lynn Ware Peek and John Wells on Public Radio in Park City and surrounding counties.

Really delighted to have been featured on the CBC's legendary show Quirks and Quarks to discuss coral and their future, and appreciate this Q&A as well.

This truly thoughtful *full-page* review in Science expands the conversation around corals in a way that I hope is only a start. (And yes, I'm blown away by the comparisons to two authors I admire very, very much!) 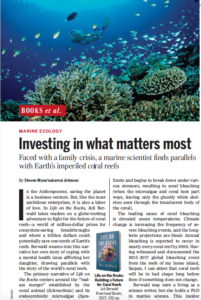 My first Q&A for LIFE ON THE ROCKS! So grateful to Tara Lohan and The Revelator for this wonderful writing about what drove me back to the coral reefs. 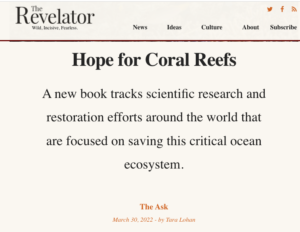 This gorgeous review in the April print issue of BookPage really feels like it connected with what I was trying to do in LIFE ON THE ROCKS: “Dazzling…LIFE ON THE ROCKS shimmers with radiant prose, sending out rays of hope for the future of coral reefs. As Berwald immerses in a glimmering undersea world, she also encourages them to discover ways they can support efforts to preserve the reefs, which play a key role in maintaining the fragile ecological balance of our oceans.” 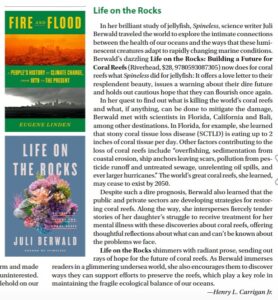 The April print issue of Scientific American calls LIFE ON THE ROCKS “highly readable,” and observes: “The threats to coral reefs are daunting and multilayered, but so, too, are the solutions. Berwald goes beyond the usual methods (preservation, reef-safe sunscreen) to describe unlikely efforts by special-ops veterans turned reef doctors, marine scientists and a conglomerate candy company.”

To be reviewed along with the great coral scientist Charles Shepard by the legendary Tim Flannery in the New York Review of Books is truly incredible. "[S]plendid…Berwald’s great strength lies in revealing a fast-moving, complex global catastrophe through easily understood case studies.” 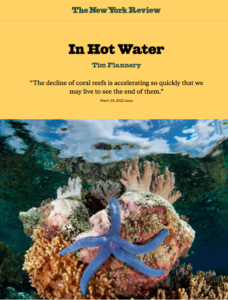 Amazing that LIFE ON THE ROCKS was the cover of Booklist! From the **STARRED** review: “[A]n excellent study of efforts to save the reefs…Solidly researched, sharply observed, and compassionately rendered, the parallel struggles in LIFE ON THE ROCKS make for science writing that is illuminating on several levels." 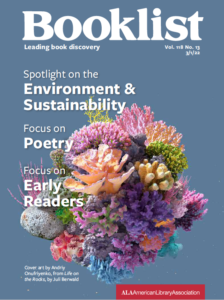 LIFE ON THE ROCKS was reviewed in Publisher's Weekly: “Ocean scientist Berwald blends memoir and science writing in this colorful look at the state of coral reefs…making for moving dual story lines about health, healing, and hope. Nature-minded readers will find much to enjoy.”

From Kirkus's lovely review of LIFE ON THE ROCKS: "Science journalist Berwald, the author of a book about jellyfish, Spineless, brings a doctorate in ocean science and keen curiosity to an energetic investigation of the plight of coral reefs, threatened by warming waters, overfishing, and pollution....Along with sharply drawn profiles and lucid renderings of ocean life, the author interweaves her narrative with a memoir of family trauma: her teenage daughter’s overwhelming anxiety and OCD, whose causes seem as complex as the forces that assault coral reefs."

Ever thought about how fast jellyfish can swim? I really hadn't either until I had this fun conversation with Jordan Dunbar for the BBC show More or Less. (The answer starts around 23:30, or check out my blog.)

Looking for some quaran-reads? Here's some of my picks of great science writing by women in Austin Woman. They are all so wonderful! (Plus, the fun graphic)

Truly a joy to share this wide-ranging conversation with Kara Grace Muzia on her wonderful podcast, So You Want to Be a Marine Biologist

This Q&A was a great treat, from Tara Lohan and the Center for Biological Diversity's The Revelator.

Love this interview about motherhood and jellyfish with the wonderful Eileen McGinnis in Literary Mama.

The New York Times Review of Books wrote: "If there really is such a thing as “jellyfish journalism,” as Berwald says, then she’s the dean of the genre, and a fun one at that." All I can say is WOW!

When I wrote the proposal for SPINELESS, one of the books that was a constant inspiration was Helen Macdonald’s H IS FOR HAWK, an incredible book about loss, and fathers, and literature, and being a woman, and about hawks. It showed me all the ways that looking at one thing very hard and seriously can teach you about so much else. The feeling I got reading this review by Helen Macdonald is hard to put in words. It’s like being touched by someone very far away who understood you very well.

Spineless in the Wall Street Journal!

The Atlantic wrote a transporting review of Spineless.

I spoke to Simon Worrall at National Geographic about the Secret Lives of Jellyfish.

Humbled by the reviews of celebrated conservationist Tim Flannery in The Australian and Alaska Writer Laureate Nancy Lord in the Anchorage Daily News.

Amazing that Spineless was on the Best-of and Must-Read Lists at Cosmo, Buzzfeed, HelloGiggles, Popular Science, Read it Forward, and Cosmo!

Kirkus featured Spineless in a wonderful piece by Megan Labrise.

I was really touched by this amazing review in NPR by the wonderful Brian Castner.

A review ran in Shelf Awareness for Readers. Bookseller Hank Stephenson writes that SPINELESS is “an excellent addition to a growing body of literature seeking to expand readers’ minds about what exactly qualifies as a mind.”

I’m so grateful for a truly exquisite review in the Texas Observer by the fabulous Asher Elbein.

A few more amazing mentions: Parade, Southern Living, and W magazine! And a really fun review chock full o’ jellyfacts in BookPage! And this list at Signature is amazing: jellyfish alongside Alec Baldwin!

Science Friday: Jellyfish - The Misunderstood Genius of the Sea 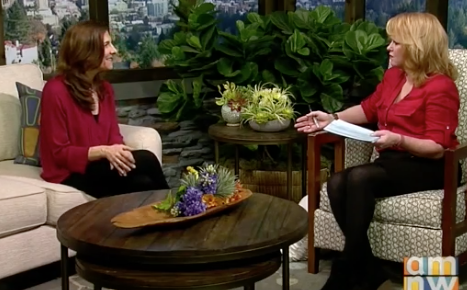 Forum with Michael Krasny, KQED: The Mysterious Lives of the Jellyfish

Maryville Talks, HEC-TV: A Jellyfish Journey (This one won an Emmy!)

NPR with Ari Shapiro: In 'Spineless,' How Jellyfish Have Survived Throughout Time

Minnesota Public Radio News with Kerri Miller: A look inside the beautiful, bizarre world of jellyfish

The Texas Standard Radio Show: This Science Book is for People Who Wouldn't Normally Read a Science Book