Something happened that I didn’t see reported in any news sources that I follow and I think more of us should know about it. On October 5th and 6th, leaders from around the world met for the fourth Our Ocean conference. Started by Secretary John Kerry in 2014, the meeting is like a G20 or UNFCCC for the oceans. It’s high-level talks about the health of our seas.

The real reason why this meeting is newsworthy is because it’s not supposed to be just talk. The goal is to produce commitments to ensure the oceans’ safety and health. This year, over $6 billion was pledged. The EU hosted the meeting in Malta and also committed more than $645 million to tackle problems like plastic pollution, protecting marine ecosystems, combating climate change, and countering piracy. Participants from 100 countries were there including 50 Heads of State or ministers.

Small countries pulled their share of the load, many committing to turn large swaths of their seas to marine protected areas. Like national parks on land, these are among the best ways to preserve the health of the seas and have been shown to have spillover effects that enhance local fisheries. The country of Palau, for example, announced that it will work towards closing 80% of its waters to commercial fishing, leaving 20% for local fishermen. The self-governing island of Niue in the Pacific announced a marine protected area encompassing 40% of its seas. I would be remiss if I didn’t note that on this topic, the U.S. was silent.

In fact, the U.S. was fairly silent on the conference overall, which may be the reason for the crickets from U.S. news organizations. I could find no press release or information from the State Department about the U.S.’s role in the meeting. I searched “our ocean malta” on CNN, NPR, FOX, and The New York Times and came up empty-handed.

I did find two pieces of U.S. news about the meeting. People reported that  Prince Charles delivered a speech about plastic pollution and later he released rehabilitated sea turtles “while wearing a suit.” His speech was quite powerful and he warned that “a sense of urgency” about our oceans is lacking. And strikingly, conservative Breitbart News  reported that Pope Francis sent a letter encouraging attendees to deal with marine issues that affect the well-being of a large number of people such as sea-level rise, human trafficking, slave labor, and opportunities for the poor.

To me, among the most interesting revelations is that some of the loudest voices at the table weren’t nations, but rather companies. The Ocean Conservancy with non-profit and commercial partners like Procter & Gamble, 3M, and PepsiCo announced a $150 million initiative to develop solutions that maximize plastic recycling. Microsoft’s co-founder Paul Allen committed to investing almost $40 million to fight illegal fishing and Airbus announced plans to put up a network of satellites for the same purpose. Is this a signal that when our political votes aren’t effective, our votes with our dollars could have a real impact?

I have no illusions that this meeting will make a difference in the health of the oceans. Not this week or this year or maybe even this decade. It took 20 years for the Paris Climate Agreement to happen and lots of small steps and many missteps had to happen first. (And one big misstep on the horizon.)

But if we don’t even know that we’ve started taking steps, we’re never going to get anywhere. 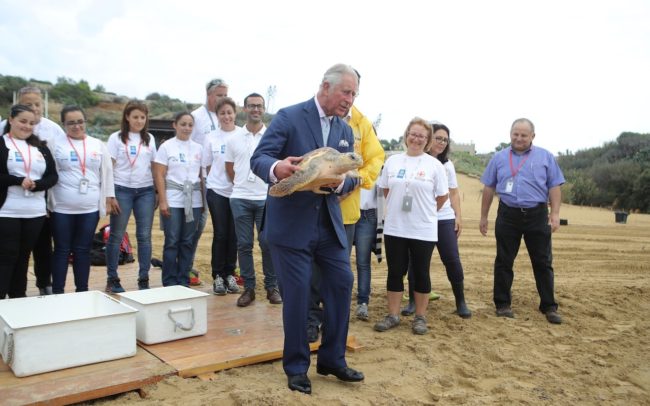 Credit: Steve Parsons/PA via The Telegraph