I’m pinching myself. SPINELESS is out in the world, and it’s been getting some incredible coverage. I’m going to give a rundown here, because each one of these shout-outs about jellyfish and our oceans’ health means so much to me. And what’s more, the variety of places where SPINELESS is showing up is beyond my wildest dreams. I want to give an enormous thank you to my incomparable publicist Glory Anne Plata at Riverhead, who spread the news of SPINELESS far and wide.

Back in August, Publisher’s Weekly gave SPINELESS a starred review! And then, they also put it on the list of “Fall’s Most Anticipated Books.” Right next to Oliver Sacks! And I was so delighted when Kirkus Reviews–a magazine I get at home and read enviously (because I have wanted to be an author for so long)–published a truly beautiful write up. UPDATE: And then Kirkus’ fabulous Megan Labrise interviewed me for this remarkable piece.

SPINELESS has also made it onto a few other lists for fall. I’ll start with the most surprising: Cosmopolitan’s list of “28 Books You Need to Read in 2017!” And it’s an absolutely incredible list. If you want to have some books in mind the next time you find yourself in a bookstore, this one’s really a keeper, among them Paula Hawkins’ Into the Water, Roxane Gay’s Hunger, Jessmyn Ward’s Sing, Unburied, Sing, Jennifer Egan’s Manhattan Beach, Celeste Ng’s Little Fires Everywhere, Zinzi Clemens’ What We Lose, not to mention Toni Morrison and Hillary Clinton!

None other than Scientific American  AND New Scientist, two of the most incredible science magazines out there, gave jellyfish a plug too. I’m especially thrilled to be mentioned alongside Danna Staaf’s Squid Empire, because cepalopods are fascinating and also I’m going to have a chance to speak with Danna in January at Stanford University! (More on that soon.)

A New York website Nylon included SPINELESS on a list of recommendations from bookshop employees–who are undeniably some of my favorite people in the world! And it made it onto the website Read Brightly, which is a literary website for parents that also includes grown-up reads. And one more: the lifestyle magazine Real Simple featured SPINELESS in the very editorial still life at the top of the page, along with a list of 5 books to read this fall.

Thank you, thank you to all of these outlets. I’m so grateful that you found space in your pages for stories of jellyfish.

ADDED LATER: A couple more places where SPINELESS has shown up that have my huge thanks!

This review by ScienceNews was beyond thrilling. I’m just blown away by how perfectly the writer, Erika Engelhaupt, captured what I was hoping for in the book.

When I read this review in NPR by Brian Castner I was waiting in line to buy something at a store and it came in on my phone. I completely welled up and had to step away from the cash register. It says so much about what I was trying to do with SPINELESS. I’m ever grateful that these words exist.

A few more surprising mentions: Parade, Southern Living, and W magazine! And a really fun review chock full o’ jellyfacts in BookPage! And this list at Signature is amazing: jellyfish alongside Alec Baldwin!

I’m enormously grateful to LitHub for featuring an excerpt of SPINELESS. It’s the chapter about how jellyfish sense the world around them using many, many faces. Oh, and they also go to space in that chapter. And for your listening pleasure, you can also hear me read the excerpt to you! 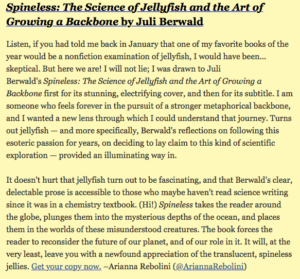 A sighting in Vanity Fair!! 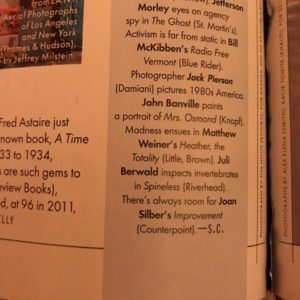 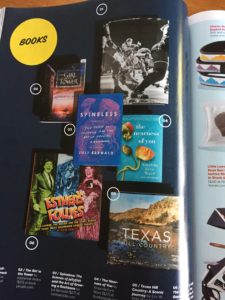 Southern Living included SPINELESS in their round up of “The Best New Books to Read During the Holidays” writing, “It’s a story of personal discovery, rediscovery of the underwater world, and an earth-spanning journey to study these complex creatures, all the while throwing into stark relief the importance of understanding and protecting our increasingly endangered marine ecosystems.”

A review ran in Shelf Awareness for Readers. Bookseller Hank Stephenson writes that SPINELESS is “an excellent addition to a growing body of literature seeking to expand readers’ minds about what exactly qualifies as a mind.” And I’m so grateful for a truly exquisite review in the Texas Observer by Asher Elbein.

In the Literary Magazine Open Letters Monthly,  Steve Donoghue says SPINELESS “morphs with disarming ease from memoir complete with wacky characters, sharp dialogue, and unexpectedly touching moments to natural history infused with curiosity and no small degree of wonder…” And Book Riot included SPINELESS in their nonfiction newsletter roundup and (gasp!) compared it to the incomprable Mary Roach!

I’m incredibly thrilled that a chapter of SPINELESS was excerpted in this month’s Discover Magazine, on shelves now. It’s part of the chapter about the immortal jellyfish, one that still twists my mind in knots. 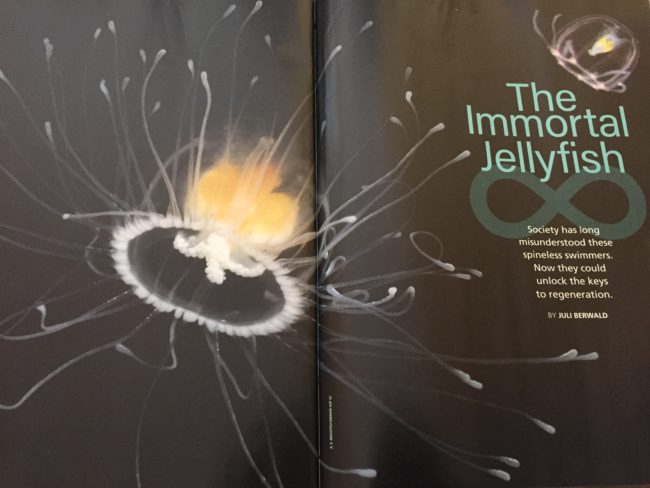 And last but certainly not least…..drum roll…..SPINELESS made THE NEW YORKER! 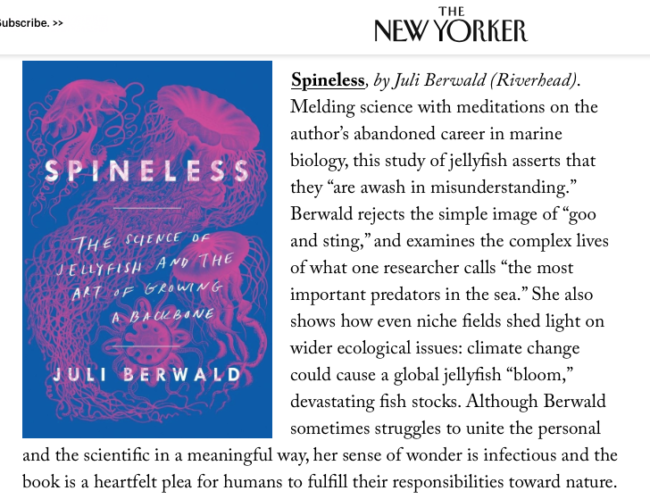