I’ve had the most extraordinary response from SPINELESS. Beyond anything I could imagine. I thought I might share some more of that goodness here.

It’s been amazing visiting book clubs around Austin and talking with readers, from groups of lawyers and doctors, to groups of women who have been reading together for decades, to philosophers and teachers and writers who have all made me feel welcome in their homes or the restaurants where they meet. I was completely delighted to receive this incredible jellyfish art from Sachi Nelson, which is made from pieces of glass, mirrors, beads, and–most delightfully –fossils called Devil’s Toenails that you can find in the creeks around Austin. Sachi had no idea that I actually have owned the url DevilsToenails.com for years, waiting the day that I start a girl band called Devil’s Toenails. (Despite the fact that I have a terrible voice and can’t play an instrument.) 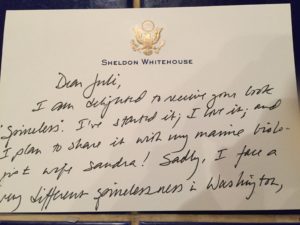 I have also been just amazed by the incredible fan mail I’ve been receiving. About every other day (sometimes more!) I receive emails from people who take the time to let me know that SPINELESS has connected with them in some way: through a past that swam through the sea like mine did or because of an encounter with jellyfish (sometimes these stories are awful, of course) or in the best cases because it made them think about the world in a different way. Some that have been of particularly moving include a musician in Florida who dedicated a song to SPINELESS, a hand-written letter from Senator Sheldon Whitehouse of Rhode Island, an email from a 9-year-old that included a design for a polyp finder, several notes from parents that resulted in fantastic Skype calls with budding marine biologists, and a gorgeous drawing from a proud father in California whose daughter illustrates luminous jellyfish. I love receiving all of these so much! 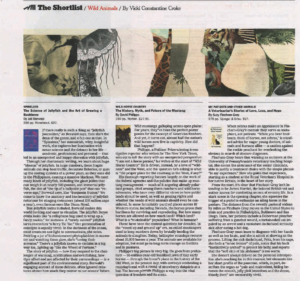 Recently, I had the enormous pleasure – ok, even more than that. I was  blown away by a review of SPINELESS in the NEW YORK TIMES REVIEW OF BOOKS. I always hoped, but never dreamed, that my book might be reviewed in the NYTBR. I can’t tell you how many years I’ve been a reader of those hallowed pages. To read this review was an exceptional joy.

And last, SPINELESS is now being published in the UK and Australia! And so some amazing press has started up there including wonderful writeup by noted Australian environmental writer Tim Flannery in The Australian and a super fun radio interview with the euphonious Phillip Adams on ABC Australia.

In the UK, the Guardian asked me to write an excerpt-ish essay for their Sunday lifestyle section. The editors had initially planned on a photo shoot to go along with the piece, but we couldn’t quite find an appropriate tank of jellyfish to pose next to within driving distance of Austin. So instead, they decided to illustrate the piece. When I saw the image, I couldn’t have been more thrilled. I mean, how often do you get to feel like an actual superhero – albeit one that still mostly looks like a mom in a wetsuit? All I could think was how powerful art is. The artist Eva Bee somehow summarized the most important thing about SPINELESS in a single image: I looked at jellyfish and saw the world. 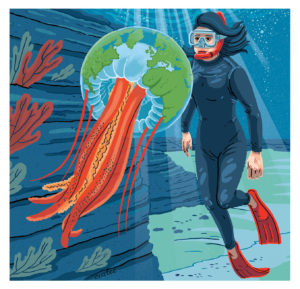 UPDATE: When I wrote the proposal for SPINELESS, one of the books that was a constant inspiration was Helen Macdonald’s H IS FOR HAWK, an incredible book about loss, and fathers, and literature, and being a woman, and about hawks. It showed me all the ways that looking at one thing very hard and seriously can teach you about so much else. The feeling I got reading this review by Helen Macdonald is hard to put in words. It’s like being touched by someone very far away who understood you very well.